Luck is not a strategy

Home/Best Of, Fundamentals, Protips, Video/Luck is not a strategy

Luck is not a strategy

There’s a classic Internet meme, which is a moment from an equally as classic South Park episode, that makes a point of sublime importance: the Underpants Gnome. 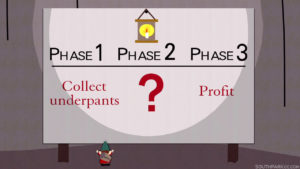 The genius of this moment is that it represents, in a funny way, a whole class of ways in which most people, particularly freelancers, fail: they come up with a plan that relies on magic, which is also known as luck.

The common thought pattern is: “I’ll do [X], then the problem will be solved.”

The problem with that is the often-forgotten middle step: “I’ll do [X], then magic/luck will happen, then the problem will be solved.”

The challenge with this is that we can’t rely on magic or luck. In other words, luck is not a strategy.

Think about luck as the bonus, the cream on the cake. The alternative to luck, what we really need, is a strategy.

Here’s the above problem, reframed into a strategic framework: “We have problem [Q]. In the past, things [X1] and [X2] have solved problems very similar to [Q]. But [X2] is too time-consuming and expensive, even if it is more thorough than [X1]. But [X1] has often failed to solve problem [Q] many times, and the usual reason is because [X1] is implemented using tactics [Y1] and [Y2]; so instead, I’m going to try it with the higher success ratio of tactics [Y3] and [Y4].”

Now that is a strategy!

But here’s the thing. Your job probably isn’t to create a strategy. It’s probably to do something else. But anything else you’re hired for — really, anything—is improved when you add a strategy to it! And think about it from the eyes of your boss: do you want someone who will just do the work? Or someone who will come up with a better strategy and then use it to do the work even better?

Few people do this, for a variety of reasons. One is that coming up with a good strategy is hard. Another is that a lot of people conflate “fun brainstorming and chatting” with actually doing the thinking and hard work of coming up with a strategy. A third reason is that many people haven’t even realized or ever thought that yes, Virginia, you can just create and propose a strategy to improve what you’re doing or should be doing.

Said differently: a bit of thought and planning increases the likelihood everything goes much, much better. Don’t ask my friends and family about this (because this observation is true even on the personal level.) I’ve spent far too much time rethinking anything they want to do to optimize it and to make it even better. At least better from my point of view!

Read the next chapter
Or read another chapter >>

Learn With The Best

Morgan has led digital for multiple presidential-level campaigns, has run 92+ person agencies in three continents, and has lots of experience managing challenging clients. He’s spent 11 years compiling the refining the list of his best managing-up practices that became the core of this course.

Chapters by Category: Fundamentals or Advanced?

Want to dip your toes in by reading a few articles for free? Go for it! 🚀

Schedule a free 22 minute Zoom with Morgan to know more about the benefits for subscribers... or anything! ☕

Or get started with our book, course & community!

The Open Secret that we exposed, to quote one our friends:

“The open secret of professional work is that results are not the main factor in determining how happy your clients are with your work.”

Close Sliding Bar Area
We use cookies to ensure that we give you the best experience on our website. If you continue to use this site we will assume that you are happy with it.OkPrivacy policy